When Liverpool takes on Burnley at Turf Moor on Wednesday night, they have a must-win game on their hands. The Reds have a chance to reclaim their place in the top four after Chelsea’s victory over Leicester City.

A win for Liverpool would put them ahead of the Foxes on goal difference heading into Sunday’s final match. Burnley hasn’t been at their best recently, which helps Klopp and his team.

Liverpool will seek vengeance against a team that defeated them 1-0 in the reverse fixture at Anfield back in January. Given the stakes in this game, the Reds are the clear favourites to win, and we expect them to do so.

Burnley’s season is coming to an end with a mixed bag of results, with two wins and two losses in their last four games.

On Saturday, Sean Dyche’s side were thrashed 4-0 at home by Leeds in an afternoon to forget.

It was the third straight defeat at Turf Moor, following defeats at home to Newcastle and West Ham.

Burnley’s two most recent victories, at Wolves and Fulham, ensured their place in the Premier League next season.

In a 2-1 win over West Bromwich Albion on Sunday, goalkeeper Alisson scored an injury-time headed goal to keep Liverpool in contention for a top-four finish.

After Mo Salah cancelled out Hal Robson-opener Kanu’s for the Baggies, the Reds appeared to be heading for a frustrating draw at The Hawthorns.

But Alisson, Liverpool’s unlikely hero, scored a header from a corner five minutes into added time.

Jurgen Klopp’s side won their third game in a row, following victories over Southampton and Manchester United in the previous week. The Reds would move into the top four with a win at Burnley.

Burnley: Due to injury, Burnley are still without defender Kevin Long and winger Robbie Brady. Nick Pope, the goalkeeper, is a doubt, and fullbacks Dale Stephens and Phil Bardsley are unlikely to return.

Burnley ended Liverpool’s 68-game unbeaten home run in January with a 1-0 win at Anfield. With 29 draws in previous meetings between the sides, Liverpool still leads the head to head 56-38.

In advance of the Europa League final, Solskjaer provides an update on Maguire 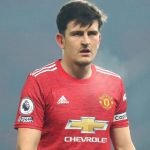 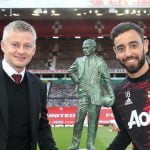 Fernandes, the Man United Player of the Year, outlines his ‘more important’ goals