Harry Kane is uncertain whether he’ll continue at Tottenham for the foreseeable future amid reports of a potential summer exit.

The 27-year-old has managed an impressive 215 goals and 46 assists in 327 appearances for Spurs. His scoring exploits have made him a fan favorite, but he is yet to lift a single piece of silverware in north London.

“I think that’s a hard question to answer right now,” said Kane on whether the speculation has affected his future as quoted by Sky Sports.

“It’s important that all my focus is on the two England games coming up now and the rest of the season with Spurs and then the Euros.

“To be thinking about speculation or rumours would be damaging in terms of my own performance.

“I always like to be focused on one goal and one job and that’s to finish strong with Spurs, win these qualifiers with England and hopefully go on and have a great Euros.

“Look, I try to stay out of that speculation as much as possible. I’m fully focused on doing the job on the pitch from now until the end of the summer, and then we’ll see where we go from there.” 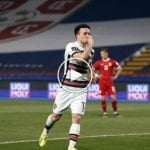