Granada remain in 10th place, having lost three games in a row, and Martinez will be hoping for a turnaround against Alaves this weekend.

Madrid’s unbeaten LaLiga run continues with a 4-1 victory over Granada.

They went into the halftime break with a 2-0 lead, with Modric catching Silva at his near post and Rodrygo adding a second just before the break.

Molina pulled one back with a volley after a Courtois save, but the visitors rounded off the game with two goals in two minutes.

Odriozola’s shot was deflected by Silva, but Benzema took advantage of the goalkeeper’s error to score a fourth goal from long range.

Thibaut Courtois – 8.5
The Real Madrid goalkeeper was busy, but he stood firm when Granada fired at him. The reflex save in the dying minutes to deny Domingos Quina was unquestionably the highlight of his performance – world-class stuff from the Belgian.

Marvin Park – 7
A dominant performance from the 20-year-old, who provided a constant outlet down the right flank with his tireless runs and also contributed to Real Madrid’s second goal, winning possession with a sweet tackle and then setting up Rodrygo. With a possible injury, he was taken off at halftime, and Zidane will be hoping it’s nothing serious.

Eder Militao – 7
In general, the Brazilian was accurate with his passes and showed good positional sense, but he was caught off guard in the build-up to Molina’s goal. He also has three clearances and two tackles to his name.

Nacho – 7
Nacho was a rock solid defender, making six clearances on the night, which nearly turned sour with a poor backpass near the end, but Courtois was on hand to clear the danger.

Miguel Gutierrez – 7
With a delightful chip, the youngster linked up brilliantly with the Real Madrid attackers and also provided an assist for Modric’s opener. His defence, on the other hand, needs to improve.

Federico Valverde – 7
Valverde put in a lot of effort to make things happen while also taking over as Real Madrid’s captain with four key passes. He was a consistent ball carrier who also threw some excellent throughballs.

Casemiro – 7
The Brazilian provided excellent cover for Real Madrid’s back four and attempted to stifle Granada’s forward progress at all times.

Luka Modric – 8
He got things started with a rare goal and didn’t look back after that, effectively distributing the ball and making three key passes.

Rodrygo – 7
Rodrygo scored his first La Liga goal of the season with a simple but confident finish, and he was generally looking bright.

Karim Benzema – 7
His perfectly placed header was brilliantly saved by Rui Silva in the first half, but he didn’t really threaten Grenada after that. However, he pounced on a Grenada goalkeeper error after the break, firing home into an empty net from range. Resurrection.

Vinicus Junior – 6/10
In possession, he looked dangerous, weaving passes together and charging straight at Granada’s defence. However, his final product was once again lacking.

Alvaro Odriozola – 7
Odriozola had a fantastic cameo, keeping things in check at the back and even finding time to rush forward and score a beautiful goal.

Eden Hazard – 6
With a neat pullback, the Belgian quickly recovered from a poor first touch to set up Odriozola for Real Madrid’s third goal.

Marco Asensio – 6
He only got a whiff of the ball on rare occasions, but one half-chance bounced off the net’s roof.

Isco – 6/10
Isco’s first touches were heavy, and he nearly cost his team late in the game when he allowed Suarez to steal possession and lift a shot inside the box.

Mariano Diaz – N/A
He was Real Madrid’s last substitute, but he saw very little of the ball. 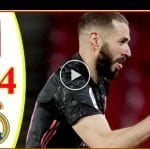 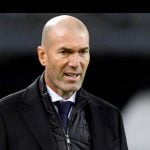