GOAL! Ronaldo makes it 2-2! He goes the same way, firing it into the bottom left corner of the net to score his second of the game and send Portugal back into second position.

It is also Ronaldo’s 109th goal for his country, to go level with the Ali Daei for the most international goals. Kounde was the man who gave away the penalty, after blocking Ronaldo’s cross with his arm. 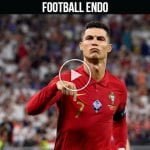 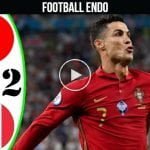