Netherlands Vs Austria 2-0 Extended Highlight And All Goals 2021.

With a 2-0 victory over Austria, the Netherlands have qualified for the knockout stages of Euro 2020.
They led 1-0 at halftime after Depay scored from the penalty spot, and they dominated the game for the most part, with Austria failing to put them to the test until late.

Just after the hour mark, De Vrij came close, but Bachmann made an excellent save, and De Ligt was denied on the follow-up.

After Depay set Malen off in behind, he squared it to Dumfries, who fired it into the back of the net, Netherlands doubled their lead just a few minutes later. 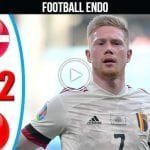