Lionel Messi is seen waving from a window at Paris–Le Bourget Airport after landing in the French capital, as hundreds of Paris Saint-Germain fans gathered outside chant, “Messi!”.

👋 Lionel Messi meets the @PSG_Inside fans for the first time!

😅 Safe to say they were a little excited. pic.twitter.com/OBZHOqV8mC

As it has been reported by multiple outlets that La Pulga has signed for PSG.

How much will Lionel Messi earn at PSG?

During his time at PSG, he is expected to earn around €35 million (£30 million/$41 million) per season, in addition to team and individual bonuses.

When will PSG unveil Leo Messi?

Paris Saint Germain have scheduled a press conference on Wednesday August 11 at 11am.

Official: PSG will have a press conference tomorrow at 11:00 am (Paris time) at the Parc des Princes for Leo Messi. pic.twitter.com/NnnY6jyCT7

Messi is currently undergoing his medical as new PSG player.

🎥 Messi arriving at the hospital ahead of his medicals as new PSG player. #Transfers

Lionel Messi has come to an agreement with PSG, will earn €35 million 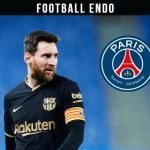 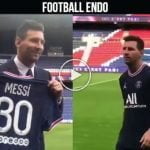 Video: Lionel Messi In A PSG Kit Leaked Online, Messi will wear no. 30

One comment on “Video: Lionel Messi has arrived in Paris”